Have you ever done an indoor triathlon? It’s amazing what a few runs with the Mid-County Run Club will do for you! I started doing some of my track workouts with MCRC on Thursdays and was quickly persuaded into doing a triathlon; actually my first ever triathlon. Swimming is my weakest point so the thought of doing a triathlon has always scared me. 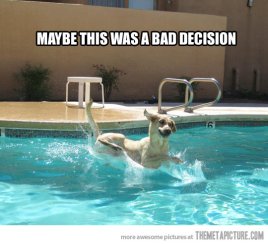 I was convinced that I wouldn’t drown and that it would be a lot of fun! John Moore told me that it would be a ten minute swim, thirty minute bike and a twenty minute run. Your distance would be whatever you covered in the allocated time then converted over to meters from miles.

So…I registered and got started on serious training, swim training that is lol. I’m pretty confident with the bike and run portions of a triathlon just not so much with the swimming part. Having a pool in your backyard is a plus to training! 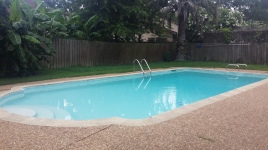 My method of swimming has always been dog paddle or back strokes because I stink like a rock if I try swimming any other way. The goal to training was to not drown and survive race day. I did a lot of research online on different self taught swimming, breathing techniques and strokes then went for a swim trying to use those techniques.

The first few days in the pool I used a kid’s float using it as a guide to help me keep my arms in front of me and just use my legs for guidance. Once I mastered that, I moved it to my feet to keep my legs from stinking to the bottom of the pool while I worked on my over head strokes. Once that was mastered, I was able to keep myself afloat without sinking. My next task was to learn to breathe while I was swimming. They say you don’t hold your breath while you run, so why should you when you swim. Makes sense, right?!

I had to teach myself to put my face in the water while in the shallow end of the pool while doing the motions of swimming but also to learn to breathe by taking a side breath on every few strokes. I found it easy to do until I had to actually swim to the deep end doing the same thing. Swimming is no easy task and certainly not easy when trying to teach yourself but after a couple of weeks of swimming several times a day for 5 days a week I felt confident enough to start tracking my swims.

I trained in the pool until a few weeks before the race due to maintenance being done on our pool and that was a poor decision not to continue training elsewhere in the meantime. I got a swim in the day before the race and I felt like I hadn’t swam in months. WOW! Amazing what a little time from training will do to your body.

The race location is less then five minutes from home but I wanted to get there a little early so that I could take a little tour of the facility where we would be since I had never actually been there before. It was held at the YMCA Port Arthur Branch which is great and I was impressed.

The event began at 8am with the first wave of swimmers going at 8:15am. I was in the second wave going in at 8:35am so I got to watch the first swimmers and kind of get an idea of what exactly it was that I would be doing. 8:35am…it’s go time…ten minutes to swim as many meters as I could without dying! I started off way too fast in my first lap and by the end of my third lap I gassed. Everything I learned at home went straight down the drain during those first three laps. They had lap counters at the end of the pool and my counter was my friend, Jason Hanley. He was ever so encouraging and positive giving me the little push I needed to continue on. By the time got to my eighth lap, I was done but still had a few minutes to go. I grabbed the side of the pool where Jason was standing and took a deep breath and then another and another all the while he was telling me to suck it up and get it done lol.  I managed to get three more laps in before the ten minutes was up which gave me a total of 275 meters. It wasn’t a great swim and I definitely felt it every bit of the way but I got it done and it was transition time…

First time to be on a spin bike! I adjusted my seat and bars then was on my way for a thirty minute ride among a bunch of friends in a very hot and sweaty filled room. I got a rhythm going so that I wouldn’t have too much bunch while peddling in and went with it. The idea…peddle as fast as you can! Who knew you could sweat so much from indoor cycling!?! I was a sweaty hot mess with puddles of sweat on the floor under me. Since this was an event with several friends and others that I typically see at most of our local run races we all had a few laughs and giggles while cycling when Christina said, “oh my peaches!” I so felt her pain and was certain I would for days to come after the event. Amie James was even beside me braiding her curly locks while she cycled…definitely can’t do that in a road cycle race. So, 17.9 miles later I was done with the cycling and ready to transition over to the run portion… 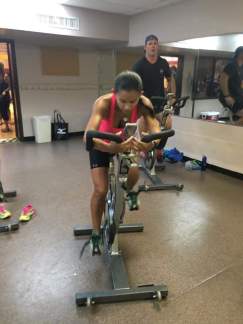 Transitioning over to the treadmill, my legs were like mashed potato soup! I kept saying to myself, “it’s only twenty minutes”. I jumped on the treadmill, hit start and worked my way to a nine minute or so pace for the first mile or then sped up a little after that while watching my time. I ran 2.29 miles with an average pace of 8:44/mile for twenty minutes.

All the participants waited and watched the last heat finish their runs then the scores were calculated with an awards ceremony afterwards. When awards were announced, I had placed 3rd. After looking at the times there was a little bit of an error when it came to mine and another participants finish time. My run mileage was written down as 3.29 miles rather then 2.29 and thankfully Amie was there to catch it, because everything had been converted over to meters and calculated a certain way that I didn’t even notice the mess up. We wanted it to be right and the correct person placed in 3rd with their medal because it wasn’t me.

After going through the times and fixing the mileage on my run, it placed Amie in 3rd! I couldn’t have been happier and it was so well deserved on Amie’s part!!! She’s a ROCKSTAR that never gives up even though everything in life comes at her at once sometimes. Congrats my friend on a job well done!!!

This was a great event and I’m ever so thankful for those who talked me into doing it because now I really know what it is that I need to work on to get better and I look forward to doing this again next year with hopes that more people will sign up!